Reuniting With The Polar Bears of Churchill (again) 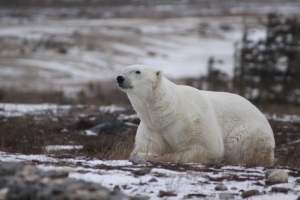 I’m sitting on the train to Churchill, heading to see the polar bears once again. This journey technically began at 4am Saturday morning (November 6). That said, the journey always begins before it technically begins.

I started my quest to see polar bears in their natural habitat three years ago and I’ve been going back to Churchill every year since. I almost didn’t go on the trip this year. I had taken time off to go see the grizzly bears at McNeil River in July and wasn’t sure about more time off work.

“Yeah, yeah. . . I know what you’re thinking, but you’re coming on this trip! You promised,” Shannon gently reminded me. Shannon works at The Great Bear Foundation and along with biologist, Chuck Jonkel, brings a small group of people to “the polar bear capitol of the world” every year.

My flight to Winnipeg was scheduled to leave at 6am, which meant heading to the airport at 4am Saturday. I was so proud of myself because, for once, I packed Thursday night, 32-hours before when I’d typically pack for a Saturday morning flight. Thinking I was ahead of the game was a mistake, however. I ended up having so much work to do that I stayed up through the night Friday until it was time to head to the airport Saturday morning.

“This trip is just a series of short naps,” I said to my friend, Heather. This is the first year a friend is coming to Churchill with me. I’ve been talking about it for 3 years and finally, one of my most adventurous friends decided it was time to join me.

We landed in Winnipeg around 2pm Saturday and headed straight to the hotel. After we dropped our gear off, we decided to go for a walk to find a good restaurant where we could have lunch. Now, I don’t want to offend anyone who lives in Winnipeg, but by the time we found a restaurant that looked like it might serve edible food, it was dinnertime.

After an exceptionally spicy Chinese meal at Hu’s on First, we made our way back to the hotel. By this point, we were exhausted, not only from walking around Winnipeg for several hours, but also from the lack of sleep the night before. After spending time in the hot tub and not having the attention span to wait for the Steam to turn on, we decided to make it an early night.  We were also well aware that it might be the last good night’s sleep we’d get for 9 nights.

“I’m setting my phone alarm for 9am,” I said to Heather, aware that this was the latest possible moment we could wake up, in order to be at the train station by 11am (and get breakfast, and get coffee). Alan and Leslie, a wonderful couple I met during my first visit to Churchill suggested we call them around 9am to make plans for breakfast before getting on the train.

I heard the phone ring during what felt like the middle of the night. I chose to ignore it, confident that my phone alarm would go off at the designated time. Heather also seemed to be choosing to ignore the phone, so I went back to sleep. However, underlying my sleep was a little voice, “you should see what time it is. Alan said we’d speak at 9am. Maybe it is 9.” So I looked at the clock.

We started plotting how we were going to accomplish everything by 11am. The hotel stops serving breakfast at 10am. We were packed but we hadn’t showered. The nearest Starbucks was a 15-minute walk, the opposite direction of the train station.

“So, I guess we’re not going to shower,” Heather said, eliminating the thing we thought we could most live without, given the options.

“Because it’s daylight savings time. It changed in the middle of the night,” she explained. Note to people who work in the hotel industry: as guests are checking in, remind them of such details as time changes.

We were so relieved we had an extra hour, Heather and I got back into our beds and talked about all the things we had time to do now. “We can walk to Starbucks!” “We can buy water!” “We can shower!” “Breakfast is open for another hour and a half!” By the time we finished discussing all of our options, we only had time for breakfast and a shower.

“Would you like anything from Starbucks?” Alan texted me. This is one of the reasons why Alan and Leslie are among my favorites. Check. One more thing crossed off our list before embarking on a 2-day train ride.

Breakfast, by most people’s standards, was fairly mediocre. But, it was free, and things taste better when you don’t have to pay for them. As we learned to say following our all-day quest for good food in Winnipeg, “it was alright. . . for Winnipeg.” After breakfast, we made our way to the train station and met up with the rest of the group: Sam, Dan and Roxanne, Josette (French, from France, and living in British Columbia), Alan and Leslie of course, and Jeremy (from the UK).

I called Chuck to let him know that the entire group coming from Winnipeg was accounted for and ready to board the train. Chuck was leading the majority of the group, traveling by bus, from Missoula, Montana. It’s definitely worth doing that bus trip once in your life. After you’ve done it once, you can just take the train from Winnipeg. The group on the bus will join you on the train in Le Pas.

We boarded the train in Winnipeg and immediately began playing games with our new friends. Some games were real games, like Scrabble Slam and MadGab. Other games were made up on the spot like, “Guess The Conductor’s Name.” Everybody played along without hesitation, which facilitated all of us bonding instantly.

Oh – another great thing that happened: we were greeted at the train by the same conductor I traveled with last year. I’m not going to tell you his name because if I do, then I can’t tell you all the cool things he did for us – don’t want him to get in trouble.

It’s 10:45am Monday.  We’ve been on the train almost 24 hours now, and many people are already referring to the Dining Car as “The Bar.” The group from Missoula joined us on the train around 3am. I opened my eyes to find Shannon, standing over me, laughing. . . or smiling loudly. Soon I saw Bob , Frank, and finally, Chuck.

You can read about Chuck in my Churchill year-one blog: here. What I find amazing is that, 3 years later, Chuck still has a bunch of new stories and information to share. This morning he told us all about the railroad between Winnipeg and Churchill. He talked about when the track was built, who owns each section, and shared insights about anticipated repairs. What kicked off the conversation, though, is what’s really. . . funny. . . or scary. I choose funny.

“You have a different engine on the train now than when you left Winnipeg,” Chuck said.

“Well, because they’ve had some derailments lately and it’s (the route) so far away from any repair services that they want to have the best-working equipment on the train before we head any further North,” he responded, as if this was not cause for concern.

Relieved to learn that our train now had a better chance of completing the trip to Churchill, we headed to the dining car (aka “the bar”) for breakfast. The food on the train is surprisingly good. I ordered the “daily special omelet,” with wheat toast. I couldn’t figure it out – the toast tasted phenomenal. Sure, I added peanut butter and jelly, but this was a level of deliciousness that exceeded PB & J. Finally I had an epiphany, “I know why the toast is so good – BUTTER!” Listen, I know they say butter isn’t good for you, which is why I haven’t tasted it in so long. But butter is really good for toast.

“How often do you use the word ‘oh’?” I just heard a husband ask his wife, referencing her journal entry. They’re part of the Missoula group so I don’t know their names yet. The man has a travel GPS unit that he has suction-cupped to the train window. “He likes to know where he is,” Shannon informed me. I don’t know exactly where we are right now, but here is where we’re headed: 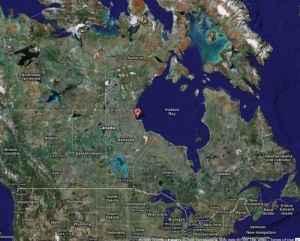 When you’re on a train for 2 days, you have a lot of time to talk.  Eventually, you’ve caught up about all the important stuff and the conversation starts to get a little silly, i.e.:

“Coffee Crisp is most flammable but Milk Duds burn the longest. . .”

“My friend used to live in LA and one day she decided to go to the mountains in the Palisades for a hike, for some peace and quiet.  And then she turned around and saw Nick Nolte, which scared her into moving to Montana.”