For all the good times, defining moments, and magical experiences I’ve had (and there have been many), it’s always a blessing when another comes along.  I just returned from a long weekend in Big Sur.  It’s been tradition during the past 3 Thanksgiving weekends to drive up the coast and attend my friend Shiva’s yoga retreat. It’s something I look forward to every year. But this year, having literally just returned from back-to-back trips to the Arctic and Turks & Caicos, I actually considered not going. I wasn’t sure I felt up to more travel and was enjoying my time at home.  I also felt completely relaxed and re-treated (or so I thought).

Thankfully I listened to the other voice in my head – the one that reminded me how important it is to disconnect from the phone, computer, and daily routines, and to reconnect with myself, friends, and a more natural rhythm of life.
I drove up the coast Friday morning and was immediately at ease, with the ocean by my side the entire way. I turned my phone off before I officially went off the grid and dropped completely into the experience.  Life still happens without a phone – in fact, it happens without interruption. I took my time driving up the coast and found a little beach town to get lost in along the way.

The town had one main street, only 5 blocks long. There was an old saloon and a restaurant that looked like a pirate ship.  I ate lunch at the pirate ship restaurant, and sat on the upstairs deck outside, overlooking the ocean.  The town was simple and charming – if I ever dissapear, it’s possible I took up residence there.

As I continued driving I noticed an Elephant Seal viewing area on the side of Highway 1. In the dozen times I’ve made this drive previously, I never noticed this turn-off.  It’s easier to pay attention without the cell phone! I pulled over and checked out the elephant seals.  They can weigh up to 2 tons and are NOT pretty animals.  It was odd to see all these huge beasts lying on the beach – they looked almost prehistoric.  There was one little, white seal who was loving the sun and appeared to be smiling as she scratched her head with her fin and then settled back to sleep – she was pretty cute.

I arrived at the retreat center around 3:30 and went straight into the hot springs.  The hot springs overlook the ocean and provide instant relaxation.  As it turned out, all my friends decided to take a leisurely drive up to Big Sur, so we all arrived “late” (between 4 and 6pm instead of 2pm).  With no phones, we just trusted we’d find each other there whenever we all arrived.  And of course we did. We connected at dinner and then went dancing in the dance dome.  After we finished dancing we each picked up an instrument (my friends provided the live music) and started jamming.  We were just playing, free-form and having so much fun.  I looked around at this group of 10 particular friends I hadn’t seen in a few months and just smiled. It felt like home to be reunited.  Also, while this was billed as a “yoga retreat,” this group of friends inherently makes the dynamic more of a party.  Y’know when you have a friend who you have too much fun with (not that there is such a thing); that person whose eyes light up when he looks at you and says “uh oh, trouble is here!”?  Well, there were 10 of us who feel that way about each other so needless to say we  had a lot of fun! After dancing and our impropmtu jam session, we went back down to the hot springs for a couple hours (they’re open 24-hours).  We caught up and relaxed some more.
Saturday was probably my favorite day of the retreat (although they were all fantastic) and one of the most fulfilling nights of my life so far.  We had a wonderful breakfast, practiced yoga, ate lunch, and then went down to the beach.  There was a 4-6pm yoga workshop and session but none of us ended up going.  Some went surfing, some went to the tubs, some of us just sat on the deck and watched the sunset.  We reconnected at dinner and had some wine.  At 7:00pm I headed down to the massage room for one of their signature massages, with the sound of the ocean waves crashing all around me.  When I emerged from the massage room our yoga group was in an enclosed room with hot tubs, candles lit, singing.  The acoustics were phenomenal.  Now comes the really good part…

Ambika, Joey, Kishan, Janet, Kristin, and I gathered in another room on the property, sat in a circle and caught up for a little while.  We laughed and plotted our night’s activities – sleep was NOT on the agenda.  After everybody else went to bed, the 6 of us returned to the hot tubs, reunited with our other friend Matt, and soaked for a couple hours. At about 2am Ambika and I went upstairs to the deck, pushed a couple massage tables together, laid down, and looked up at the stars. There were no city lights obstructing the view and so many stars that it almost looked like there was more light than darkness.  And then we saw a shooting star. “Let’s count shooting stars!” I said and Ambika agreed.

We turned it into a game, keeping track of how many shooting stars each of us saw.  After about an hour (and 7 shooting stars later), our friends Janet and Matt came up and joined us.  “What are you guys doing?” Matt asked.
“We’re counting shooting stars,” I replied.
“We’re not just counting them,” Ambika elaborated.  “It’s a game – we’re keeping track of how many each of us has seen.”
“Ambika has 4 and I have 3,” I said.
“There’s one!!!!” exclaimed Matt.
Soon, the score was: Ambika 7, Colette 6, Janet 2, Matt 1.  Then our friend Joey joined us, which required adding one more massage table to our star gazing station.  We explained the game to him and before long Joey had seen 2 shooting stars himself.  Finally, we heard “awwww, wow…. what’s going on here?” as Kishan approached.  He took a picture of us (which I’ll post when he sends it to me).
At one point security came by and shined a flashlight on us.  “What are you doing?” the guard asked.
“We’re counting shooting stars,” I replied.  Not the answer he was expecting…
“Oh wow! That’s really cool!” he said.  “Ok, you can stay here and stargaze.  Just don’t fall asleep here.”
The final score was Colette 11, Ambika 10, Janet 5, Joey 2, Matt 1.  This is one of my most favorite moments in life so far (and not because I won “the game”).  To be able to lie down, look at the sky and count shooting stars is so simple, beautiful, fun, and fulfilling.  Everybody should do it! And if you can do it with a handful of close friends, it’s even better.  It felt familiar as if I’d done it once before when I was a little girl (but I don’t think I have done it before).  It made us all feel like kids.  At one point Matt said, “This is a dream, but it isn’t a dream.  This is amazing!” It felt like we were characters in a fairy tale.  Many of our adventures involve travel to foreign countries, all-night parties, long hikes, or some involved plan.  It was a striking contrast to have so much fun and hear so many giggles engaging in the simplicity of counting shooting stars.
“We have to come here every year. This is our thing. We created ‘a thing’ and it’s important that we always come back here together and share moments like these,” Joey said.
And we will.
Eventually, we made our way back to our rooms – the sun was about to rise and put a damper on our shooting star game and we had about 4 hours to sleep before our morning yoga practice.

Sunday was another beautiful day.  It felt like summer, clear skies and warm – rare for late-November in Big Sur.  We had brunch after yoga and then made our way back to the tubs.  Our Sunday departure tradition for the past 3 years has been to spend the day in the tubs and leave in the evening after most of the holiday traffic has died down.  At one point Daphne and I were discussing options during Labor Day weekend 2009 – Burning Man, Spirit Bear trip in British Columbia, or a trip to the South of France.  “Well, it’s a win-win-win decision,” I said.

“And look where we’re sitting now,” Daphne reminded me as we soaked in hot tubs, suspended above the ocean.

Another great part about the weekend was this place on the property where somebody left messages written with rocks.  The messages were updated several times daily.  They were messages written in stone, yet not “written in stone.” And if you didn’t pay attention, you may miss a subtle change.  It said “Like fixes like” for a few hours one day and then it switched to “Life fixes life.”  The night we did our stargazing, the sign said “Starlight” with an arrow pointing over the ocean.  You could never take for granted that the sign would be the same and you never knew when it would be updated.  There was no “schedule” that sign changed and it may have changed more frequently than we even observed. Nobody saw the sign being updated (even in broad daylight), it just seemed to “happen” and the message was always perfect.  As I was leaving Sunday, the sign changed again.  “I’ll miss you”

Sunset from the deck in front of our room 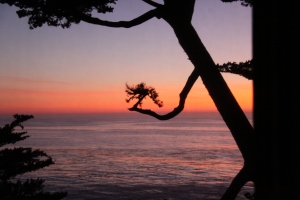 View of sunset from our room