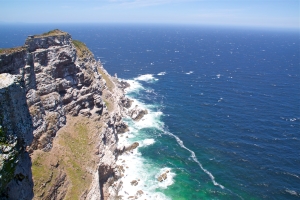 Monday we enjoyed a self-guided, aimless, walking tour of Cape Town.  Yesterday we embarked on a drinking tour of South Africa. Today we set out to discover the beauty of South Africa by driving along the pristine Cape Point Route. There’s been no time for jetlag – and little time for sleep – we’re intent on making the most of every moment we have here in Cape Town.

On the recommendation of a friend of a friend, we connected with a phenomenal guide named Marion Ellis.  As with all the amazing people we’ve encountered in South Africa, Marion is more than a guide – she’s a friend and a tremendous host.

Marion met us in the lobby at More Quarters and suggested we go back to our rooms to gather hats and jackets. It’s summer in South Africa and Marion wanted to ensure we had everything we needed to protect us from the scorching sun and high winds.

As Marion led us along the gorgeous coasts of Cape Town, she shared history and insights about the development of each area.  We made our way through Camps Bay, Clifton Beaches, Hout Bay, Noordhoek, the gorgeous Chapman’s Peak Drive, Scarborough, and the Cape of Good Hope, before stopping for a picnic lunch (champagne included).

We absorbed Marion’s verbal history of each point along the route as we stood outside, taking in the views. This was a very impressive and impactful way to learn more about South Africa.  Marion was born and raised here. She has experienced the development of these regions first-hand and has vast knowledge and wonderful stories to share.

We learned about some of the informal settlements and how the government and people are working to provide infrastructure and public services to those communities. One of the things that struck me most was the sight of thousands of shacks adjacent to some exceptionally nice homes in well-off neighborhoods.  In many places, in other countries, the poor often reside in certain neighborhoods, generally out of sight of the extremely wealthy.  It makes it easier to ignore the issues when you can’t see them.

In parts of South Africa, however, there’s no escaping it. Day in and day out, the hilltop views of some of the country’s wealthiest, those who have running water and numerous luxuries, are obstructed by shacks that appear to be barely standing. The issues here can’t be ignored and it was extremely interesting listening to Marion’s accounts of how they’re trying to tackle these challenges.

We also learned why there are two lighthouses at the Cape of Good Hope, what the city is doing to manage the baboons, and the vast ecosystems of the Atlantic and Indian Oceans which intersect here.  As we were leaving the Cape of Good Hope, Marion pointed out two eland.  Eland, the largest antelope, are shy animals so we were quite lucky to see them.  Marion suggested we journey to see the old bushmen cave paintings of eland the next time we come to South Africa. “The bushmen revered the eland,” she noted.

During a coffee stop earlier in the day, the kind man who’d been driving us around all day shared some of his personal history with us. I’m witholding his name in case he’d like some anonymity. The man was from an area called District Six. His grandfather had worked hard and built a house in the area, where our driver and his family lived. Beginning in the late 1960’s, under the apartheid regime, the 60,000+ residents of District Six were forced to leave, their homes bulldozed.

The apartheid regime then declared District Six a “whites-only” area and relocated the former inhabitants to poor, gang ridden communities. At the age of 19, this man was uprooted from his home, separated from his family, and forced to leave behind the life he knew and loved. The home his grandfather worked so hard for had been destroyed.

He had tears in his eyes when he finished telling the story. “Did you ever consider leaving South Africa?” we asked him. “No. I love my country,” he replied with honor and grace. 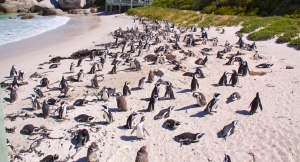 After lunch, we headed to Boulders Beach to see the penguin colony.  The penguins settled on the beach, in a residential neighborhood, in 1982, much to the dismay of the human residents. The penguins are protected, however, and Boulders Beach is a great place to view them in  their natural habitat. We did notice some entrepreneurial  human residents who had converted their garages into mini businesses to capitalize on this relatively recent tourist destination.

One of the things I’ve come to appreciate about South Africa is that the animals appear to have the right of way.  There seems to be an awareness and respect that we – people – are the visitors in the animals’ habitat. I’m often upset by the removal of wild animals from “suburban” areas in Los Angeles.  Where are the animals supposed to go as we continue to build on their land and force them out of their natural habitat? It’s inspiring to witness some of the fair, respectful, wildlife policies in South Africa.

We watched the penguins for a while and I was blown away by how they communicate.  It’s one thing to watch National Geographic and the Discovery Channel.  It’s another thing to stand 5 feet from penguins and observe their behavior.  We watched penguins approach one another and cock their heads as they squawked at each other, in animated conversation.  We saw two babies hounding their mom for food and watched several penguins swim and emerge from the ocean.

Next we headed to Kalk Bay where the brown sands of the Indian Ocean were present.  We learned that from atop Table Mountain, you can tell which ocean you’re looking at based on the color of the sand.  The Atlantic’s fine white beaches are a sharp contrast to the rust-colored sands of the Indian Ocean. Marion took us to a great gallery and shop in Kalk Bay so we could see the work of some local artisans.

As happened during yesterday’s wine excursion, we were not ready for our tour to end. On our way back to More Quarters Marion called Table Mountain Park.  “Is the mountain open?” she inquired.  Due to high winds, the mountain is often closed, so it’s important to check in advance before venturing to this landmark. “It’s open.  You should seize the moment and go up Table Mountain for sunset! It  may be closed tomorrow, so go while you can,” Marion suggested. 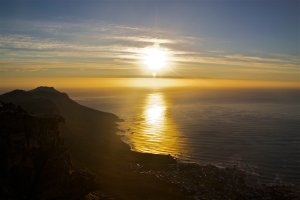 We were exhausted, but we’re in Africa and we didn’t come here to sleep.  So, we dropped off our stuff at the hotel and took the cable car up Table Mountain. It was extremely crowded as a result of discounted prices after 6pm. Rather than fight the crowds for a spot at the edge of the mountain, we purchased some Pinotage, found a quiet table, and watched the sunset peacefully.

The cable ride car back down the mountain was spectacular and something I hadn’t expected.  With the sun now below the horizon, Cape Town was lit up beautifully against the night sky.

Before heading to bed, we popped into a great bar near More Quarters, Asoka, for a nightcap. There, we were introduced to one of the most delicious drinks I’ve ever had – vanilla vodka, shaken with fresh passion fruit, passion fruit puree and vanilla sugar. They serve it straight up, with a shot of champagne on the side. Two of those and it’s time to call it a night.

Tomorrow is our last day in Cape Town.  We don’t have any scheduled activities, just time to explore and enjoy the city. I have some friends who live here I’m going to attempt to connect with. I can’t wait to share my adventures with them and to hear and learn from their perspectives as well.

If you plan to visit Cape Town, I highly recommend you connect with Marion Ellis at Cape Insights.  She will make sure you get the most out of your time in South Africa, taking you on amazing custom tours and adventures. You’ll learn a lot and have a wonderful time!