Another Magical Day With Polar Bears

Last night a polar bear visited us at the Studies Center.  Following dinner and preceding our evening lecture Shannon heard a loud knock at one of the side doors.  The door leads outside from the quiet lounge area and is not used by visitors to the Center.  This entrance is specifically used to load luggage in and out of the building.  A new group of students was expected at the Center last night so when Shannon heard the knock at the door her first assumption was that a representative from the new group was at the door.  Thankfully, before she considered opening the door Shannon thought aloud, “I wonder if there’s a bear out there . . .” Shannon’s statement prompted Jenny, a volunteer at the Great Bear Foundation, to look out the window.  Sure enough, there was a large polar bear, standing upright, banging forcefully on the door.

The bear made its way to a window in the quiet lounge and peered in at the guests who were gathering for an impromptu happy hour glass of wine.  After satisfying its curiosity with that room, the bear walked around the building and pressed its face against the window of one of the dorm rooms.  Our classmates Jeremy, Elissa, Steven, and Christina, were startled by the bear’s big face in their bedroom window.  Within minutes the Studies Center staff scared the bear away by firing flares into the sky.

For me, this close encounter with a polar bear at the Studies Center sparked images of the zoo.  In this case, we humans were in a building, behind windows secured with bars, as polar bears looked in at us with curiosity.   It seemed a fitting display of karma, and while safety is imperative, I was happy that we were all reminded of our place in Churchill.  This is the polar bear’s home, they have the upper-hand here – we are the strange alien creatures in their land.

This morning approximately half our group (myself included) set out on a Tundra Buggy to get a closer look at the bears.  I have mixed feelings about the buggies.  Their impact on the tundra is a hot topic and disputed from both advocates and protesters.  At the same time, the buggies potentially allow us to get closer to the bears and observe more of their natural behavior.  This year we’ve been fortunate to have many close encounters with bears right off the main publicly accessible roads in Churchill. I considered giving up my space on the buggy, but I’m happy I maintained it.

Using a rock as a pillow

From the buggy we saw 5 different sets of moms with cubs ranging in age from 10 months to two years old.  The first mom we saw was walking with her male cub that was almost the same size his mom.  Once she assessed the area and felt her cub was safe, the mom found a rock to use as a pillow and rested comfortably.  Meanwhile, the curious young cub made his way up to our buggy.  I had my telephoto lens on, so at a certain point the bear was too close to photograph.  This was actually a blessing – it allowed me to put the camera down and observe the bear through the open window and the back deck.  On several occasions the bear made his way toward me on the buggy and looked at me with curious, sweet eyes.  I feel a deep connection with the bears, an understanding, and an unspoken communication.  Their eyes share a story of vulnerability and playfulness.  In these moments it’s important to remember their sheer strength and power.  One look at a 900-pound bear crossing the ice serves as a quick reminder that any encounter closer than the one we were experiencing could be deadly.  After inspecting the buggy from all angles, the cub made its way back to his mother and rested by her side.

Just as were about to pull away and continue down the path, we saw 2 bears that had previously been resting approach each other.  “It looks like we might see some sparring,” our buggy guide J.P. noted.  He turned the vehicle off and we observed the sparring bears for what seemed to be at least half an hour.  Sparring is a natural play-fighting that allows the bears to practice for the real battles they face during mating season.  Male bears in Churchill outnumber female bears by an estimated ratio of 3 to 1, so often males need to fight for mating rights.  The 2 bears sparred for a while and then a third bear approached.  All 3 bears circled each other, assessing another sparring match.  2 bears – one that fought previously and the new bear – engaged in another round of sparring.  The third bear, tired from the first match, made its way to our vehicle and inspected us curiously.

As the sparring bears concluded their match, a mom, followed closely by her 2 young cubs

approached us from the other direction.  The cubs were born in January and walked in a single-file line behind their mother.  A male bear was following them at a distance.  Hungry male bears will attack and eat cubs, so the mom was moving her cubs swiftly to safety.  Once the mom and cubs got a safe distance from the male, she laid back on the ice and we watched as she nursed the young cubs. We counted our blessings again as it’s rare to observe nursing behavior.

All in all we counted close to 40 bear sightings today.  It was extremely special to observe the sparring and nursing behavior and to have the bears approach us so closely.  As we headed back to town toward the end of the tour we came across an older male bear that was quite a character.  He was rolling over, biting his paws, and stretching.  When he noticed us, he lifted his head and looked at us between his legs, then went back to his playful polar bear 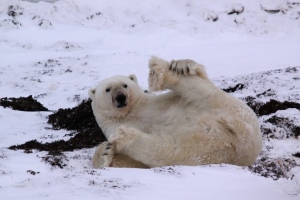 yoga.  He was extremely flexible, pulling his back legs over his stomach and up toward his mouth.  He looked at us as if he knew were taking pictures and he was hamming it up for the cameras.  As people cooed about how “cute” the bear was, we were once again reminded of his power.  After another half hour of playful stretching and tumbling, the bear sat up.  When he arose, back to us, we could see the battle scars from fights during the years.  J.P. estimated that the large male was 6 to 7 years old.  It’s almost as if our “cute” bear friend wanted to remind us of his size and power, being sure to sit up before we pulled away.

We saw several bears resting; other younger bears were out testing the ice.  We watched as one bear hopped from one block of ice to another and practiced thumping the ice with its two front paws.  Another mom with two slightly older cubs approached us as we made our way back to town.  Again, the bears were too close to photograph.  I spoke softly to the bears as they approached me on the buggy.  Then I heard J.P., “look at that sunset!”  We turned our attention away from the bears and saw an exquisite sunset.  I’ve seen a lot of beautiful sunsets throughout my travels and at home over the Santa Monica ocean, but this sunset with its beam of light radiating from vertically from the horizon through the sky was the most magnificent sunset I’ve seen.  Later I learned that this type of sunset is often referred to as a candlestick sunset and is quite common in the North. 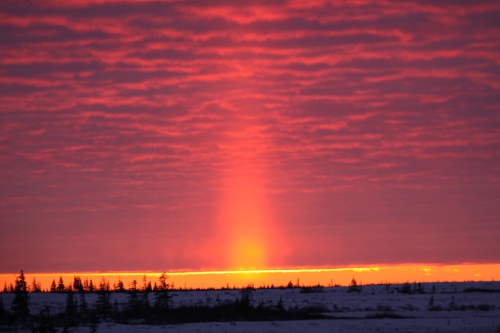