A Magical Day With Polar Bears, Foxes, and Northern Lights 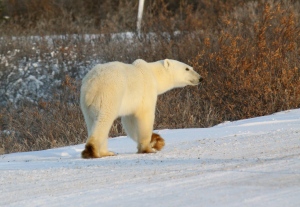 As with last year, there’s a tribe of people who gather in the kitchen with whiskey and beer after the day’s adventures and classes have concluded.  It’s a convergence of two different groups of students and biologists, sharing bear stories, ghost stories, and exchanging ideas to make positive change.  The late night kitchen gathering is one of my favorite parts of this annual adventure (yes, I will be back every year) and I find it hard to tear myself away during the early morning hours.  It’s even harder to get away when excusing yourself leads to group protests and pleas to stay for “just one more story.”  Eventually, one by one, we make our way to bed between 1:00am and 4:00am and before you know it, the alarm is going off to signal another day of Arctic adventures.

As we were on our way toward the coast to observe polar bears this morning, a bear crossed the road ahead of us.  He took his time, enjoying his walk, as we pulled off to the side of the road to appreciate him.  When he crossed the street, the bear turned and looked at us and then started scratching his neck on a sign.  I crept down the steps leading to the open bus door and took a picture of the bear standing behind the sign.  It wasn’t until we returned to the Studies Center this evening and I transferred my pictures to the computer that I saw what the sign said: “Please Do Not Disturb.”  When thinking about climate change and our impact on Arctic ecology, this picture sends an important message. (More after the picture) 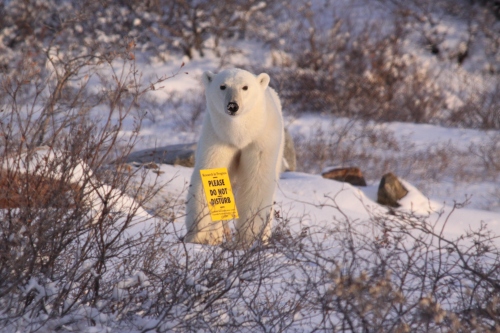 Please Do Not Disturb

We continued to make our way to Cape Merry, spotting bears and observing their behavior.  We also noticed that more sea ice had accumulated in the bay overnight.  Chuck told us that with a few more nights below freezing the ice would solidify and the bears would be able to go out and hunt again.  We saw several bears along the coast, looking at the water as if they were willing it to freeze. 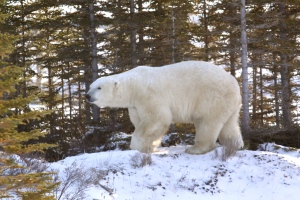 In search of a quiet place

We saw quite a few bears along the way to Cape Merry and it was a beautiful, sunny day.  One bear was sleeping in a patch of willows close to the side of the road.  There were several trucks that pulled over to watch the bear.  Seemingly aware that he was under observation, the bear stood up purposefully, looked at us and crossed the road.  Why did the polar bear cross the street? To get some rest.  Once safely on the other side of the road, the bear traversed down a little hill and laid down, barely within view.  One by one the trucks of onlookers pulled away.

When we arrived at Cape Merry we noticed a lot of fox tracks, but we didn’t see any fox.  It was almost as if the foxes were taunting us with their tracks: “Look over here!” “Oh, now I’m over here,” “You just missed me!”  After spending some time at Cape Merry, looking at the fort and learning about the history of settlement in Churchill, we boarded our bus.  We only saw one Arctic fox last year and it was during a 6:00am bear watch so it was still dark out.  I was really hoping we’d encounter more foxes this year and was encouraged by the number of 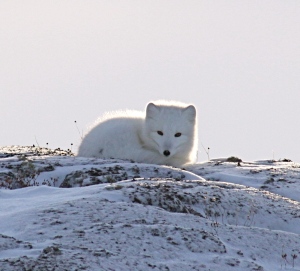 tracks we saw.  Just as everybody succumbed to the idea that the foxes around Cape Merry were out of view, a little white Arctic fox appeared on the side of a hill.  The fox made its way up the hill as we pulled over once again to watch it.  We all reached for our cameras and got some great pictures of the fox, backlit, on top of the hill.  Arctic foxes always appear joyous, as they seem to bounce around the snow and rocks.  When you actually do see an Arctic fox it’s as if the fox knows you’re taking pictures and it provides picture perfect poses in the best light of day.

We continued making our way out of Cape Merry until somebody spotted another fox coming down a hill.  This time it was a cross fox – a mix between a silver fox and a red fox.  The dark, multi-colored fox was digging and burying its nose in the snow.  Then, the cross fox looked up at us, nose covered in snow, and made its way toward our bus.  The fox observed us curiously before running off alongside the hill again. 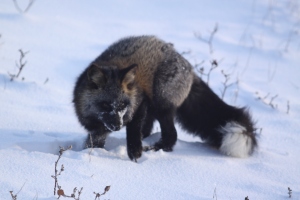 “fox!”  Once again, we pulled over to have a look. This time it was a beautiful red fox, curled up asleep on the rocks.  We all expressed our gratitude and feelings of being blessed with several fox sightings.  Not only did we see 3 foxes today, we saw 3 different kinds of foxes.

As the lights faded and the display subsided, we boarded the bus and made our way back to the Studies Center.  Just prior to pulling into the parking lot, an Arctic hare hopped right across our path – a magic rabbit to bookend a perfect day. 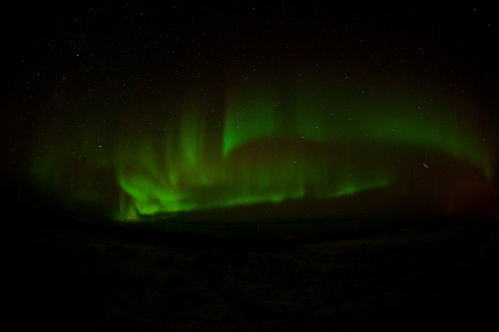 2 responses to “A Magical Day With Polar Bears, Foxes, and Northern Lights”