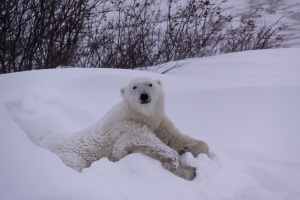 When I returned from Churchill last November I knew I’d go back. . .  someday.  Last year’s trip was an extraordinary adventure that allowed me to come face to face with the amazing white bear.  My first Arctic expedition was sparked by a haunting dream that I was sitting with the last polar bear on Earth, trying to figure out how to save him.

My chronicles of adventure, stories about the bears, lessons about Arctic Ecology, and pictures were featured on MySpace’s OurPlanet for a month following my trip.  I partnered with MySpace to help raise awareness about the impact climate change is having on the Arctic region and the polar bears, through my personal account and eye-witness experience.  My inaugural journey is detailed earlier on My Travel Tales.

What I found following that adventure is that everybody I spoke with – friends, family, colleagues, strangers on airplanes – was extremely moved by my stories and pictures.  We all hear about climate change.  Most people are aware of it.  Some people refuse to believe it. We hear about it on the news.  People like Al Gore and organizations like Stop Global Warming make sure we have access to the latest information and tips about what we can do to help.  But for most people, the effects of climate change and our individual and collective responsibility for it, remains one-step removed.  It’s far more impactful when somebody you know, even if you’ve just met them, can share a first-hand experience with you.

For this reason and because I fell in love with the polar bears and the amazing scientist and his team with  whom I traveled, I knew I would be back.  However, I thought perhaps I’d return in 2010.  The world is large and I’d like to see as much of it as possible, so I often don’t do repeat visits when traveling abroad.  I knew I’d return to Churchill just as I know I’ll return to Bali, but this journey came more quickly than I expected.  In fact, as November approached and I was feeling disappointed that I wasn’t going on the sold-out trip, I received an email from Shannon at The Great Bear Foundation: “We’ve had a cancellation. You’re first on the wait list.”

I’m doing the trip slightly differently this year.  Last year I met the group in Missoula, Montana for a 24-hour bus ride, followed by a day and a half on train.   I highly recommend that route for first-time travelers because you get more time with Chuck Jonkel, the scientist who’s headed up this trip for 25 years.  As you make your way up to La Pas from Missoula, he points out the vegetation and wildlife and signs of climate change along the way.  He also teaches you about bears and has some amazing stories to tell.  It’s also a great way to get to know the group of fellow adventurers.  Most of the people who embark on this journey are word travelers and conservationists themselves and they have amazing stories to tell as well.

This year, I picked up the train in Winnipeg.  There’s an extra day on the train but it’s far more comfortable than the bus ride.  Chuck and the rest of the group are scheduled to meet up with us and board the train sometime in the middle of the night.  As with last year, I embarked on this journey alone.  As with last year, I’ve already made some good friends.  Although I should know better by now, it always surprises me how quickly a trip like this can turn complete strangers into a distinct family unit.

In addition to the bears, Arctic fox, Arctic hares, Northern Lights, hot chocolate and other wonderful experiences this trip offers, it forces me to get out of my daily routine.  It broadens my perspective more than many trips I’ve been on precisely because the people on this trip are all making the long journey together, with the passionate desire to see polar bears and observe their behavior in their natural habitat.  People on this trip come from diverse backgrounds, the majority of them do everything they can to avoid large cities. So the conversations alone allow us to connect about things that are different from my day to day.   Traffic, the internet, going out late to see live music – these topics don’t arise in conversation. Grandchildren, forests, wildlife, ecology, biology, and books are commonly discussed.

Monday, November 9, 2009
It’s now Monday morning.  Sometime in the middle of the night, Chuck, Shannon, Bob, Frank, and Jenny from The Great Bear Foundation boarded the train, along with the rest of our group.  They met us in La Pas after driving for 24 hours from Missoula, Montana.  Ordinarily, I might have been less-than-thrilled to be awoken shortly after finally falling asleep, but when I opened my eyes and saw my old friends, I couldn’t have been happier.  Unless you’re in a sleeper car, it takes a while to settle into a comfortable sleeping position on the train.  In my case it had taken 3 hours to get just comfortable enough, so before I jumped up to hug my friends from The Great Bear Foundation, I made note of how where my head, legs, back, and feet had been perfectly sandwiched in the seats.

After hugs and “hellos,” we stayed awake and caught up for a bit.  We reminisced about stories from last year, which included 30-below weather and some unruly (and exceptionally fun) behavior on the train.  Chuck also told us stories of his various haphazard adventures, “Only the incompetent have adventures,” he said with a chuckle.  “The weather’s been nice so far – I don’t see why it can’t stay nice another few days,” Chuck noted before heading back to his sleep.  Reunited with our group and a day closer to seeing polar bears, it was easy to fall back asleep.

When I awoke this morning, the sun had just risen and was reflecting off of a lake on our right.  I noticed that a good portion of group was no longer in our car.  “Where is everybody?” I asked Shannon, clearly not awake enough to realize they couldn’t really be far.  People had started to make their way to the dining car for breakfast.  Shannon and I joined them for the next seating and continued to catch up.  Even the merging of the two groups of travelers – Missoula and Winnipeg – was effortless.  Two became one overnight and now we have our polar bear family.

We’ve got another day on the train and are scheduled to arrive in Churchill at 7:00am Tuesday.  “What are you going to do?” a nice woman named Anya asked after breakfast.  “Y’know – sleep, read, and write . . .”    One down, two to go.

Time on the train passed quickly on Monday.  As we moved North from La Pas toward Churchill we picked up some commuters from the tiny villages along the way.  The locals were going into the next “town” to do their regular (possibly only once monthly) shopping.  The train only passes through every 2 days, so going to the grocery store is a 48-hour commitment.

But passengers continuing on to Churchill had one thing on their mind: polar bears.  As we pulled into the Churchill station just after 7:00am, we saw several fresh polar bear tracks and a lot of fresh fox tracks.  We also saw an unidentifiable dark brown or black animal heading East, away from the train.  It was either a fox or a wolverine (a few had been spotted just off the side of the road at about that same time.

We gathered our luggage as quickly as we could, loaded up the vehicles, boarded a bus, and headed for the Research Center that we will call home for the next few days.

This entry was posted in Polar Bears and tagged Arctic, Churchill, Polar Bears. Bookmark the permalink.