Today we were much closer to the bears than we have been in the past. We watched them build “day beds” in the snow, where they could shield themselves from the wind and rest. We saw them eat kelp, which we learned provides the bears with salt and water, but isn’t very efficient due to the amount of calories it burns to process it (and bears need to hold onto their calories). We saw them lying side-by-side.

Today was the coldest day of our week in Churchill.  It was -9F and -23F with windchill.  Most of the bears were conserving energy.  The bears can’t hunt until the sea ice comes to shore and unfortunately that hasn’t happened yet. The bears know they need to hold onto their calories so that they have a reserve until they can go back out and hunt again.  I asked Chuck how this differs from 15 years ago.  He said that 15 years ago, at this time of year, all the bears would have been 20-30 miles out on the ice, hunting.  They’d stay there all season and come back to shore as the sea ice breaks up in Spring.  However, due to climate change, the sea ice now rolls in with the wind for a day, the bears go out and try to hunt, and then have to come back to shore before the pieces of ice go back out to sea. There was one day before we arrived when the bears were out on the ice all day (and nobody saw them).  But there hasn’t been any sea ice since we’ve been here and the bears are hungry and tired. 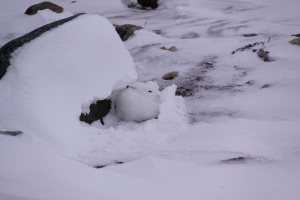 Arctic Hare sheltered by a rock

We also saw an Arctic hare – the first one of the trip. It was hard to see him in the white snow, sheltered behind a carefully selected rock.  Arctic hares have an average life-span of 2 to 3 years. We spent the entire day on the tundra, watching the animals in their natural habitat.

There’s a lot more to share and many, many more photos, but it’s time for our evening lecture/lesson so I must sign off.

Tomorrow we begin the 4-day journey home and I’ll be without internet access most of the way.  But I’ll post more blogs when we return!

One response to “Living The Dream: Sharing Ice With Polar Bears”